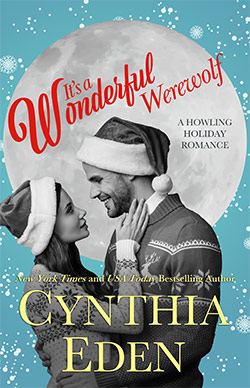 Oliver Abbott never intended to be a werewolf. Howling at the moon, sprouting fur, shifting into a beast…not exactly the life plan that the former Navy SEAL had anticipated. But an attack on a snow-filled night changes everything. Suddenly, Oliver has a new reality, and he has to leave the only woman he’s ever loved, Gia Donato, in order to protect her from his wolfish side. Yeah, being a werewolf bites. Big time. Especially when you have the biggest, sharpest teeth in town.

But Christmas is a magical time…

On Christmas Eve, an angelical “intern” offers to grant Oliver one wish. Oliver can have anything he wants. His wish? He wishes that he’d never become a werewolf. Only that wish has unexpected consequences…Gia doesn’t remember him, danger is stalking her, and, ho-ho-horror of horrors, Oliver is now a mild-mannered tax attorney. Nope, not happening. Especially the part where Gia is in danger. Oliver wants a do-over on the wish. STAT.

He will embrace his inner beast.

Oliver is an alpha werewolf for a reason. He wants his old, howl-at-the-moon life back, and he’s going to take it—fangs, claws, fur, and everything else. With the help of his angel intern, Oliver’s beast returns, and the hunt is on. Oliver is ready to fight for his second chance with Gia, and he will be at her side when danger comes to her door. Because there is no way that he will stand aside and let anyone hurt her. No way, no day. First, though, he has to convince the gorgeous Gia that she should give their love a second chance…

But it’s Christmas, right? And anything can happen during the holiday season…even a miracle for a werewolf.

Author’s note: Even werewolves can use a little Christmas magic. Deck the halls with some furry fun, dangerous dilemmas, and an uber hot hero who is prepared to grovel with hot chocolate for the woman who owns his heart. Someone is stalking her? Danger is at her door? Oliver will get his beast on in an instant in order to protect Gia. IT’S A WONDERUL WEREWOLF is a fun and festive novella (approximately 23,000 words) with an absolutely guaranteed happy ending.

The attack came from out of nowhere. One moment, Oliver Abbott was bending down on one knee and pulling out the diamond ring that he’d so carefully chosen for Gia Donato. His hands weren’t shaking from the cold. They were shaking because for the first time in his life, Oliver was truly terrified.

This was it. His big moment. He wanted to spend the rest of his life with Gia. His mouth opened to deliver the proposal that he’d oh-so-carefully rehearsed.

He was hit from behind. Something powerful and hard slammed into him even as Gia screamed. The diamond ring flew from Oliver’s fingers and hit the white snow…only, all of the snow wasn’t white. It was…red.

He managed to twist, and he shoved off his attacker. But it wasn’t a person who’d attacked him. It was the biggest, ugliest dog he’d ever seen in his life. Blood dripped from the creature’s razor-sharp fangs, and its bright, glittering eyes were locked on Oliver with what appeared to be absolute hate.

He could feel that. He knew his blood was dripping into the snow.

At her voice, the wolf’s attention—a wolf, not a dog, a freaking wolf—swung toward her. The animal let out a low and lethal growl, and its powerful body leaned low to the ground. Oliver knew it was going to lunge and attack her even before the wolf sprang forward.

So when it did leap for her, Oliver was in its path. He put his body before Gia even as she screamed in horror. The wolf barreled into him. Its mouth tore into Oliver’s shoulder and neck. He could have sworn that the asshole beast laughed as its teeth gouged Oliver. Sonofabitch. The bite hurt. Hurt even more than the bullets he’d taken while on overseas missions with his SEAL team.

Oliver shoved his hand into his pocket and grabbed for the old pocketknife that he always kept close. The thing was a certifiable antique, and his grandfather had sworn it had been giving his family good luck for generations.

Even as the growls of the beast filled his ears and even as his blood poured down his body, Oliver yanked out the treasured knife. He saw Gia run behind the beast and grab its tail.

The wolf lifted its head and turned toward her to bite—

Oliver shoved his knife into the beast. For an instant, Oliver could have sworn that he smelled something burning. That some smoke even rose into the air…

The wolf let out a loud, keening howl as it jerked from Oliver. It turned and rushed away, leaving a trail of blood in the snow.

And taking Oliver’s knife as the beast fled…because the knife had still been embedded in the wolf’s chest.

For a moment, Oliver stared numbly after the animal. His mind struggled to process exactly what had just happened.

Attacked. Attacked by an actual wolf. Sure, everyone knew there were wolves out in the wild near Jasper, Colorado, but wolves didn’t come into town and randomly bite people. That shit just did not happen as a general rule.

Too late. His legs had given out on him, and Oliver hit the snow-covered ground. His body felt funny. Not cold, but red-hot. Burning hot. He was suddenly shaking everywhere. Hard tremors that jolted his body.

“What’s happening?” Gia’s hands clamped around him. “Are you having a seizure?”

Oliver didn’t know that the hell he was having. He stared straight up and saw the full moon above him.

“It’s going to be all right,” Gia promised.

He was getting even hotter. The tips of his fingers felt weird. Like…like his damn fingernails were breaking off. And why were his teeth hurting?

“I’m calling an ambulance! He bit you, but you’re going to be fine!”

His bones were popping. Oliver shouted out in pain as his body contorted.

Okay, that wasn’t fucking normal. He knew that. This reaction wasn’t due to rabies. This was…what the hell is this?

Oliver dragged his gaze off the beautiful, mesmerizing moon. Made himself look at her. But when his head turned toward her…

He heard a heavy thumping. Too fast. Too hard. Too tempting. His gaze zeroed in on her neck where her pulse raced, and he thought…

It would be so easy to rip open her throat.

Oliver’s breath sawed out. What the hell? What was he thinking? He loved Gia. Loved her more than his life. He would never, ever want to so much as bruise her, much less rip out her throat!

And why was he hurting so damn badly?

Oliver tried to lift up his hand so he could touch the wounds on his neck and shoulder, and he heard Gia’s sharp gasp.

He looked at his hand. Except his fingers looked funny. Long, black claws had sprung from the fingertips. “N-no—” But that wasn’t what emerged from his mouth. Only a growl came out. Animalistic.

Then white-hot fire poured through his whole body, and he howled at the pain. Howled and jumped to his feet, only to stumble forward and immediately slam down on all fours.

“Let me help you!” Gia was almost begging.

But he was staring down at his claws, and he was seeing that his fingers were shifting into something else—something that looked like paws. Either he was having the craziest hallucination of his life or—

Or I’m turning into a wolf.

Another wave of that agonizing pain hit him. Gia grabbed for him, and her sweet scent wrapped around him. The sound of her racing heart filled his ears, and once more, a terrible temptation grew in him.

So easy to bite…

“Get away!” Oliver attempted to shout at her. But no words came. Only snarls and growls.

Instinct took over. The trail of blood that the wolf had left was in front of him. A trail that led out of the park and into the dark woods. He bounded forward and followed that trail even as Gia shouted his name behind him.

And when the woods surrounded Oliver, when he was far, far away from Gia, then the change took him completely.

Gia held the engagement ring in her palm. A blood-soaked diamond ring. “Please, Officer,” Gia said to the cop who stood before her. “You have to help me find my boyfriend.” She pointed to the trail of blood. She’d rushed after him, but he’d been moving so fast, and, as incredible as it seemed, Gia was pretty sure that Oliver had been running on all fours as he fled.

And he had a wolf’s claws.

But she didn’t say that. Couldn’t say any of that because the nice cop would think she was stark-raving crazy. “He was bitten and he’s bleeding, and he needs to be in a hospital!”

The cop gave her a reassuring nod. “Don’t you worry. We will find him. I’ll get more officers out here to help me search.”

But she was worrying. The snow was falling again, and the chill in the air was just getting worse and worse. Oliver was out there, all alone and hurt. She’d lost him in the woods, and she was so afraid something terrible was happening to him.

A long, low howl cut through the night.

Gia was chilled to the bone. Her teeth wouldn’t stop chattering. “I can’t. We haven’t found Oliver.” They’d searched for hours. Brought in spotlights. Brought in the best tracking canines in the county, but the dogs had barely stepped foot into the dark woods around the park before they’d immediately turned and run back out, yelping.

“We will keep searching, but you need to get home.” The officer was compassionate but determined. “What if he’s there? What if he’s at your house? What if your friend walked there during the night?”

The night was over. The sun was starting to slip over the horizon. She could just see the faint, golden edges of light trickling through the trees. “He’s not there. Not at my place. Not at his. I called and had neighbors check at both locations.” Resolution straightened her weary shoulders. “He’s out in the woods, and I’m not leaving until—”

Oliver was walking toward her. Completely naked as he came out of the wilderness. His steps were a little slow. His body uncertain. Gia let out a shrill cry of relief and rushed toward him. She wrapped him tightly in her arms. He was okay! He was…

Her body shuddered against his. She lifted her head. Stared into his eyes. “I was so scared!” Her words tumbled out. “We searched and searched, and you weren’t anywhere! You—”

His voice was off. Too flat.

Gia slowly released him. Her gaze swept over him as more worry twisted through her, and she realized—he had no wounds. No cuts. No bites. Nothing. He was completely naked in front of her and there was no sign that he’d ever been injured even though she’d seen the wolf bite him.

She jerked out of her coat. Handed it to him. “You—you need to cover up.” A glance to the side showed the cops were closing in on them. “Listen to me.” Her voice was urgent. “Everything is going to be fine.”

But Oliver shook his head. “No, sweetheart, it’s not.”

Read the rest of this preview