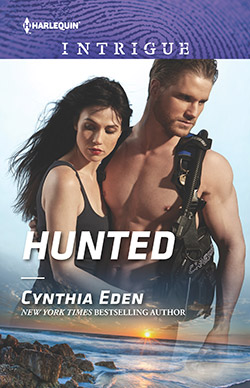 The chase is on in New York Times bestselling author Cynthia Eden’s latest installment in the Killer Instinct series!

Josh Duvane’s SEAL training not only hardened his body, but also his mind. Though his latest investigation as part of the FBI’s Underwater Search and Evidence Response Team is pushing him to his limits. The Sandy Shore killer taunts local police as Josh recovers his victims off the coast of Florida. Of all the women taken, only Casey Quinn has survived. As this unrelenting psycopath stalks her every move, Josh is all that stands between her and certain death. Now it’s time for him to turn the tables and use every ounce of training to stop the killer from having the last laugh…

I shouldn’t have left her. He could still see her, standing in front of the hotel, wearing those high heels as her dark hair tossed around her cheeks. He’d even told her that he’d wanted her to be safe because that perp was still out there. The guy was hunting women like her.

He’d been hunting her.

Josh spun around a tight corner and saw the row of partially built houses up ahead. Which house was she in? He barely braked his bike—just jumped off the motorcycle and ran for the first house. “Casey!” Josh roared her name. He yanked his gun from the holster. “Casey, where are you?” Be alive. Be alive, Casey. Answer me!

Because in his mind, he still saw Tonya Myers. She was in the water and her dark hair drifted up around her face. That can’t happen to Casey.

He rushed through the first house, shoving plastic out of his way. Construction debris was everywhere, but the rooms were empty. No sign of Casey.

Josh ran back outside. The light from dawn swept out over the water. “Casey!”

How long had it been since the perp had called Hayden? Ten minutes? Fifteen? Twenty?

It only took a moment to die. One moment.

He rushed toward the second house.

He froze. That call—it had come from the house before him. A temporary door was in place, one without a doorknob, and he just kicked that damn thing in. “Casey!” His bellow seemed to echo around him.

And then he saw her.

She was holding on to the makeshift banister that had been put in place on the stairs. She was trying to come down to him. A red imprint marked the left side of her beautiful face. There was blood on her cheek. She was too pale and she was shaking and—

He bounded toward her.

Her eyes widened when she saw him. She lifted her hand toward him, and he saw that she was gripping a blood-covered knife.

“You’re safe.” He wanted to scoop her into his arms. Wanted to hold her tight and make sure she was okay. “Where is he?”

She blinked. She looked lost. Scared. And…

Hurt. He hurt her.

Josh wanted to kill the guy.

“I—I don’t know.” She looked around, her hand shaking, but not letting go of that knife. “He… I stabbed him and he ran out of the room. He…left me.”

Grim pride swelled inside of him.

“Get me out of here,” she whispered. A tear leaked down her cheek. “It’s too much…like before. Get me out.”

He didn’t know what she was talking about, but he had to touch her. Josh curled his left arm around her as he pulled her against his body. She didn’t let go of the knife. He kept a solid grip on his gun. If the perp had run from the room on the upper floor, he could still be hiding in that house. Josh wanted to search every inch of the place, but getting Casey to safety was his priority.

She felt so delicate against him. And each time her body trembled, the rage he felt grew.

I will find you, you bastard. I will make you pay.

He led her past the broken front door and outside. He didn’t stop walking, not until they were near his motorcycle. Then he slid his hand under her chin. “Where are you hurt?” His voice was a rough growl. Her cheek was already darkening, the pink giving way to a bruise.

“I’m…okay.” Her eyes said the words were a lie. Her head turned, and she looked around the scene. Her voice became a whisper as she said, “Where did he go?”

Josh intended to find out.