“Wed or Dead” in Howl For It 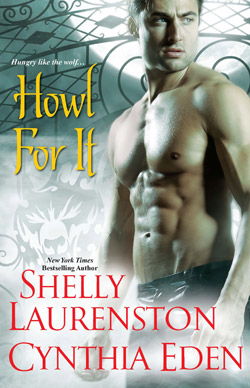 “Wed or Dead” in Howl For It Audio Sample

WED OR DEAD – by Cynthia Eden

Gage Ryder knew his human bride had a wild side. But spending their honeymoon night on the run from hunters out to finish him and his pack is sure not the kind of fun he was looking forward to. No problem–Gage will do whatever it takes to lay bare Kayla’s secrets and find the truth.  If he can keep from being captured by his own seductive game.

LIKE A WOLF WITH A BONE – by Shelly Laurenston

Quiet little Darla Lewis couldn’t be happier when the most-feared member of the South’s rowdiest pack kidnaps her.  A girl gets real tired of being overprotected by her own shifter family, and there’s nothing like an oh-so-big bad wolf to start a pack feud, unleash her instincts–and have her surrender however and whenever she wants…

Kayla glanced at the knife. Was she really supposed to just shove it into his heart? Then walk away while he bled out?

You know what he is. Don’t be fooled.  Gage’s kind was so good at deceit. She had to remember that. He’d been born to lie. To deceive.

She’d met others like him before.  So many over the years. More than most people realized.

Her own family had been attacked by someone like Gage. A man, hiding a beast inside. One dark night, he’d killed her mother and father. Left her brother in a pool of blood, struggling to breathe. Attacked her.

Monsters lived and breathed in this world. Most folks didn’t know that truth. They thought the world was all happy and shiny and full of birthday parties, play dates, and football games.

She knew better. Monsters are real. And her handsome husband, with his slow smile and strong hands…he was a monster.

Kayla took a step forward. One foot in front of the other. The mantra was the same one she’d used when she walked down the aisle. Only no minister waited for her this time.

The robe she wore rustled around her feet as she took another slow step.  Another.

And she felt something wet on her cheek.  Kayla stopped. What the hell?  Her left hand lifted and swiped across her face. Was she crying?  She never cried.  She hadn’t, not since they’d put her parents in the ground.

“Come back to bed,” Gage said, his voice rumbling out and making her jump. He faced the window, not her as he added, “I miss you.”

He wouldn’t miss her for long.

Kayla took a deep breath and forced herself to keep walking.  A few more steps, and her legs brushed against the edge of the bed. “Th-there’s something you should know about me…” His back was still to her. Why did he have to make such an easy target?

This should be better for you. You don’t have to look him in the eyes when you attack.

But stabbing a man in the back had never been her style.

Liar. The insidious whisper came from deep within. Her secret shame.

Her hand clenched around the knife’s handle. Gage was supposed to be dangerous. Lethal. The strongest paranormal bad-ass to claim Vegas in years.

Because he was a paranormal. The supernaturals were real and breathing…and many were hiding in the shadows of Sin City.

He was the perfect target right then. Tousled hair. Sated male. Defenseless. It would be so easy. Just lift the knife. Drive the blade into his flesh.

“Oh, I think I already know all the secrets you have, sweetheart,” he murmured, his voice a low and sexy rumble.

Kayla shook her head. Damn tears. “No, you don’t—”

In a flash, he rolled toward her.  He leapt up and came at her with claws ripping from his fingers.

His blue eyes shined at her with the light of the beast and he put those too-sharp and too-long claws of his right at her throat.

The move actually seemed only fair, considering that she had her knife pressed over his heart.

“In Eden’s “Wed or Dead,” Kayla Kincaid, a hunter, marries Gage Riley, a werewolf, in a quick Vegas ceremony. What should be an assignment to get close enough to the alpha wolf to kill him turns messy when Kayla falls for Gage, and her former team comes after them both. The strong characters and a fast-paced story punctuated with intense sexual encounters make this a satisfying offering.”–PUBLISHERS WEEKLY