Put A Spell On Me
Book Preview

She summoned him at midnight. The witching hour. Power swept through every inch of Serena Tyme’s body, pulsing, growing, and the words of the spell poured from her lips, faster, faster.

Her arms shot above her head as the air crackled with magic. Thunder roared and lightning flashed across the cloudless night sky. Her eyes squeezed shut, just for one fearful moment, and when her lashes lifted, he was there.

The relief that rushed through her body had her trembling.

Then he spoke. “Nice body, sweetheart.” His voice was deep and rumbling like the thunder. His golden eyes drifted over her skyclad form. Heat flared in the depths of his unusual eyes, then, voice slightly rougher, he demanded, “Now tell me who the hell you are and where the fuck I am.”

Serena drew in a deep breath and watched the man’s eyes dart to her chest. Jeez. Men. All alike—mortal or immortal—they always got distracted by a pair of breasts.

But she hadn’t called him across space to ogle her. She crept forward and kept an anxious eye on him. She knew how much power he possessed, far more than a mere hereditary witch could hope to control. The sooner she explained things to him, the better.

After all, it wasn’t an easy task to summon the devil. In fact, it took a damn lot of work to do that job.

The fire she’d built flared higher. Not her magic. His. Serena reached for her black robe, shrugged into it, and belted the robe quickly. Good-bye, nakedness.

“You didn’t have to dress,” he said. “I was enjoying the hell out of my surprise view.” His powerful legs were braced apart as his arms rested easily at his sides. “But I am waiting on my answers.”

His tone implied that he wasn’t a happy waiting camper. She really hadn’t expected him to be, though. She licked her lips, cleared a throat gone dry from chanting and the flames, and said, “M-my name’s Serena Tyme. I’m a witch and—”

He grabbed her. Moved far too fast for her to follow, even with her slightly enhanced senses.

The circle she’d drawn should have held him in place, at least for a few minutes.

But it had failed.

Oh, damn. This was bad. Or, rather, he was bad. But, desperate times and all…

His hands had locked around her upper arms. A hold too tight to break, but not fierce enough to hurt, not yet. But the threat was in his steely grip and in the eyes that blazed down at her.

“I know you’re a witch.” The flames were reflected in his golden stare. A stare that burned brighter every moment. “No one else could have forced me here. Dammit, tell me—”

Her chin lifted. “Look, I’m answering your questions, okay?” He’d wanted to know who she was, and well, question one was now answered. As for the second question…“You’re about an hour away from Atlanta, Georgia.” When those eyes of his narrowed, she added, in a questioning tone, “In the U.S.?” The guy spoke with no accent, and she had no idea where he had been when her spell grabbed him. Although the where didn’t really matter to her. All that mattered was that he stood before her now.

She saw a muscle flex along the hard, square line of his jaw. His black brows fell low as he studied her. His dark brows were a perfect match to the slightly too long, night-black hair that brushed the collar of his shirt. After a tense moment, he asked, “Why am I here, witch?”

Ah, this was the tricky part. She let her gaze dart down his body. He was dressed as any man would have been. Loosely buttoned black shirt. Jeans. Ragged boots. He looked normal. Could have been the guy next door.

If the guy next door happened to be the most powerful paranormal being in the Other world.

Because, despite what most folks thought, paranormals did exist. They lived right alongside humans. Demons, vampires, and witches like her—they were everywhere. But the humans, well, sometimes they had a hard time seeing what was right in front of them.

But she could see exactly who, or rather what, was in front of her.

The man before her had many names. After all, if the legends were true, he’d been roaming the world for centuries, and he’d continue to roam and fight and raise hell long after she was dust.

But the name most commonly given to him? Soul hunter. An eternal destroyer.

The rarest of the paranormals, soul hunters were produced from the mating of witches and all-powerful, level-ten demons—the true terrors of the demon world.

All the better to hunt.

She stared at him and couldn’t contain the nervous tremble that shook her body. Hell, when she’d been a kid, her parents had told her that he was the boogeyman.

The immortal who came after the Other when they crossed that fine line between right and wrong. Because a soul hunter had more than just witch and demon powers. He was the immortal who could also steal a life away with but a simple touch.

“Always be good, Serena.” Her mother’s husky voice echoed in her mind. “Because the soul hunter, he comes after witches when they’re bad.”

Oh, yes, the threat of the big, eternal badass had kept her on the straight and narrow for years.

His fingers tightened around her arms. “Are you trying to piss me off?”

Serena blinked. “Uh, no. Really—I—” Oh, wait, what had he wanted to know? Jeez, she was tired. And scared. And so weak. The first binding had hurt her more than she realized. She’d barely managed to focus enough power for the summoning spell.

When his fingers moved, just a bit higher on her right arm, and he brushed the still tender flesh, she winced.

“Why. Did. You. Summon. Me.” Gritted from between his clenched teeth.

Ah, right. Simple enough answer for that one. “Because I need you.”

He glared down at her and she realized his features could have been handsome but they weren’t—no, they were far too hard to make that “handsome” cut. His features looked as if they’d been carved from ancient stone. Too-sharp cheekbones, a nose that was too long, and a high brow. His skin was a darkened gold—made only more so by the flickering light of the flames.

As she stared at him, that hard mask slackened—just for a moment—and disbelief flashed across his face as he said, “You know what I am.”

Of course. Would she have gone to the trouble of bartering for a dark spell if she hadn’t?

“You know what I am, and you still summoned me.” He shook his head as if he couldn’t believe she’d actually called for him. “I bring death.” He freed her. Stepped back. Clenched his hands into fists. “I’m not some kind of idiot demon that you can screw around with, sweetheart. I’m—”

“A soul hunter.” Soul eater. That was the less-than-respectful term. Her voice was soft but firm as she continued, “I know. I also know that you’re exactly what I need.” The other witches in her coven had said that she was crazy. That she was courting the devil.

Summoning him didn’t mean that she could control him, and soul hunters were extremely unpredictable.

In fact, until the menacing guy before her had appeared, she’d actually wondered if soul hunters were just myths. She’d never met anyone who’d known a soul hunter, and certain paranormals had sure been crossing that good/evil line at will lately.

Which brought up just why she needed her hunter.

“What is it that you need from me?” His words were a rumble of sound that seemed to shake through her body.

“I need you to save me.” The mark on her arm burned with remembered pain. “And to do your freaking job and kill the bastard who is after me.” Not just her, but her entire coven. If the soul hunter didn’t help her, well, they’d all be dead soon. Serena was not ready to die. Not without putting up one hell of a fight, anyway.

Because she was one witch who wasn’t about to burn easily. 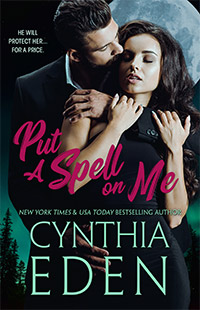