“Please. I’ll pay any price. I just—I don’t want to die.” Julianna Patrice McNall-Smith clenched her hands into fists as she was led into Devlin Shade’s office at VJS Protection, Inc.

The company was high-end, supposedly very discreet. If you had a problem, VJS was the solution. They offered protection. A twenty-four hour, seven-days-a-week bodyguard service, and with the way her life was falling straight to hell, she could sure use that service.

“Why don’t you sit down?” Devlin said, his deep voice rumbling as he closed the door behind her, sealing them inside the sanctuary of his office.

She probably shouldn’t like his voice as much as she did. She shouldn’t be so aware of him. It was wrong.

So why did he feel so right?

Julianna sat down and carefully crossed her legs in front of her. She noticed that Devlin’s gaze dipped to her legs, and she tensed for a moment. Stop it. Keep your mask in place. You can do this.

He pulled his stare away and paced toward his desk. He didn’t sit down, though. Instead, he propped his hip against the edge of the desk and stared at her.

“My lawyer told me to come to you,” Julianna said because she didn’t like the way silence stretched in that office. “Sophie Sarantos said your firm was good at discreet protection.” But her laugh was brittle. “I don’t really care if you’re discreet or not. I just need help.” Because Julianna knew a killer was out there, and she didn’t particularly want to die.

His voice was really quite dangerous. So rumbly and deep. It made her think of things she had no business even considering right then. Julianna straightened her shoulders. Maybe he wasn’t jumping to take the job because of the things he’d heard about her. “I’m not a killer.”

He just stared back at her. His eyes were such a bright, brilliant blue. Gorgeous eyes. When she looked into his stare, Julianna felt a little bit lost—and she knew that could be a dangerous thing. Devlin was tall, strong, with powerful, wide shoulders that stretched his suit jacket. His thick, dark hair slid away from his forehead. Devlin was a handsome man, not perfectly so, but handsome in a rough, rugged way. His cheeks were sharp, his jaw cut and square, his nose was a little bit hawkish, but that just added to his rugged air. And his lips…

I have no business noticing his lips.

She shifted a bit in her seat and uncrossed her legs. Then, nervously, she re-crossed them immediately. Her skirt slid against her skin.

Devlin cleared his throat. “Your case is going to be delayed. You realize that, of course. With the prosecuting ADA now dead—and with all the news that the guy was a straight-up psycho who’d been stalking your lawyer, hell, there’s no way you’ll be seeing the inside of a courtroom anytime soon. All of ADA Eastbridge’s cases are about to come under one hell of a scrutiny. All those people that he sent to prison—they’ll be shouting injustice and demanding new trials. Because of him, the prosecutor’s office is a serious cluster fuck right now.” He waited a beat. “And that can only be good for you.”

Her breath felt cold in her lungs. “Good for me? Sophie isn’t just my lawyer. She’s also my friend. That man—Clark Eastbridge tried to kill her! That is hardly good for me.”

Devlin watched her with that unreadable stare of his.

“You mean it’s good for me…” She understood now. “Because Clark Eastbridge being a psychotic prick means I probably won’t see the inside of a jail.” Sophie had actually told her the same thing. Eastbridge had been pursuing her case with particular fury, and now that the truth about him was out…well…even the press was going a bit easier on her.

“That’s exactly what I mean. Guilty or innocent, things have changed for you now.”

She shot to her feet and nearly leapt toward him. Their legs brushed as she leaned in toward him. “I’m not guilty.”

His words hurt her. Why she should be surprised he thought she was a killer, Julianna didn’t know. Plenty of people had thought and said the same thing. That she was a calculating woman who’d taken herself a rich husband. She’d bided her time until she was legally set with his money, then she’d brutally killed him.

If only people knew the truth about her dead husband.

If only they knew the truth about me.

“Until the real killer is caught, I do have to worry about the possibility of spending the rest of my life in jail.” And that couldn’t happen. She’d already lived too long in a cage. She wouldn’t be doing it again. Even Sophie didn’t know that Julianna had made plans…escape plans. If things started to look too dark, she was going to vanish.

And, lately, with fear crowding ever closer, vanishing had started to look like the perfect choice. I just don’t want the world to remember me as a killer.

“You want me to catch the real killer?” Devlin asked, cocking his head a bit as he stared down at her.

Her hands lifted and curled around his shoulders. Why was she touching him? Julianna wasn’t sure, but she just tightened her hold on him. “No, I want you to keep me alive. He’s after me. I know he is, and I want to hire you as my bodyguard.” Money wasn’t an issue for her. Not anymore.

For just an instant, the past swam before her. That terrible morning when she’d woken on the floor of her den and found her husband’s dead body right beside hers. His blood had soaked the carpet. It had been under her body. On her.

Devlin’s gaze slid over her face. Slowly. As if he were taking her in. Julianna was far too conscious of her fingers on his shoulders. Of his body so close to hers. Of—

“Do you always get what you want?”

“Do you always…” Devlin continued, voice roughening a bit, “use your body to get what you want?”

Her mouth dropped open in shock, then immediately closed as rage swept through her. “I’m not using my body.” She jerked away from him. Sophie had been so wrong about the guy. Going to Devlin had been a huge mistake. He wasn’t the man she’d thought, not at all.

Julianna rushed for the door, but Devlin caught her before she’d taken more than a few steps. He curled his fingers around her shoulder and spun her back to face him. “Every news story says that you’re a femme fatale. The woman who seduced billionaire Jeremy Smith and convinced him to marry her after a whirlwind courtship.”

She was the one who’d been seduced. And trapped.

“And then you come in here, offering to pay anything if I help you.”

Her chin shot up. “I was talking about money. Any amount you wanted. I wasn’t talking about paying with myself.” And she hurt right then. Why, Julianna didn’t know. He wasn’t the first person to hurl insults at her. “Despite what you might think, I’m not a whore, high-priced or otherwise.”

His fingers slid down her arm. “My mistake.”

“Yes,” her voice had turned icy, “it was your mistake. But it was mine, too. I never should have come here. I’ll find someone else.” She gave him a curt nod. “Forget you ever saw me.”

She turned on her heel and once more aimed for the door—and freedom.

“Forgetting you won’t be easy,” Devlin said. “No hope of that.”

But she wasn’t stopping now. He’d insulted her, attacked her…and she’d just wanted his help. He had no idea how afraid she was—every single moment—and she needed the fear to stop. She hadn’t been able to sleep for a full night, not since before Jeremy’s death. Her nerves were shattering, and the terror had to stop. Julianna grabbed the door knob, yanked that door open, and hurried outside.

Before the doors could close, he stepped inside with her.

That space was way too small for the two of them.

But the doors had just closed, and now they were alone in that elevator.

“You need to know,” Devlin began. “When I take a case, I make it a point to learn every secret that my client may have. I never go into any situation blind. Not anymore. When you do that, deadly mistakes happen.”

“You’re not taking my case, so it hardly matters.” She thought they’d already gotten that clear. “There are plenty of other bodyguards in the city. I’m sure they’ll take my money without even thinking twice.” And without digging into her past. She didn’t want Devlin knowing her secrets. She didn’t want anyone knowing them.

Why was the elevator so slow? She craned around him, trying to see the control panel.

“Why do you think someone’s after you?”

Seriously? “Oh, I don’t know…maybe because I woke up in a pool of my dead husband’s blood. Someone drugged me and just left me there. And then, let’s see, maybe it could be the emails I’ve been getting. Those lovely notes that say I won’t get away with my crimes. That I’m next. Could be that,” she muttered.

The elevator chimed. The doors opened. Yes. She was on the ground floor and home free.

She shook her head and marched through the lobby and out into the night. It was late, the street was pretty much deserted—and, lucky her—she’d gotten a parking spot just a little bit down the block.

Her heels clicked on the sidewalk. The cold wind caught her hair, tossing it behind her as she hurried. Going to VJS had been a colossal mistake. For the first time, Sophie had led her astray. Fumbling, Julianna pulled her car keys from her purse. Her fingers closed around them, and she remotely unlocked the car.

“Has anything else happened?”

She almost jumped at his voice. He was far, far too close.

And Devlin was reaching out to her again. Not roughly, but, carefully curling his hand around her.

He’d rather gritted out the please request.

But she stopped. Her fingers slid over the keys. It was getting colder and she thought she even felt the light drop of snowflakes on her.

“Has anything else happened to make you think that you’re in danger?” Devlin demanded.

Her finger pushed the button to start her car’s ignition. The engine growled to life. She shook off Devlin’s hold and turned to go—

Her top-of-the-line, way-too-expensive luxury car erupted into flames. A loud boom filled the air, making her ears instantly ring even as Julianna was tossed back, flying from the force of the blast. But she didn’t fly far because Devlin grabbed her. He wrapped his arms around her and turned so that his body was shielding hers when they hit the ground.

She couldn’t hear anything but the ringing in her ears. She could see Devlin’s face. His mouth was moving but—

“Are you all right? Dammit, Julianna, talk to me!”

She could feel something wet sliding down her cheek. She knew it wasn’t tears. She’d cried all of those out already. So it had to be blood.

“This…” Julianna managed to say. “This happened.”

The furrow between his brows deepened.

Her fingers curled around his arms. “You asked…” Dear God, her car was burning. Well, what was left of it, anyway. “You asked what happened to make me think I was in danger…This happened.”

Someone had just wired her car to blow. If she’d been in it, or, hell, maybe if she’d even been a few steps closer, Julianna knew she would have been dead.

Good. Because she really wasn’t in the mood to die. 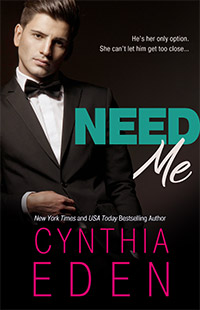