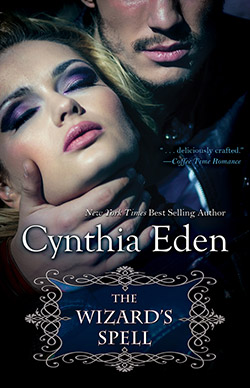 What do you do when you find a handsome wizard in your bedroom?

Sara Myers is terrified when she wakes to find a man next to her bed…and when the man literally vanishes before her eyes, she realizes that Torian Le Fury isn’t your average burglar. Sara soon discovers that Torian is a powerful wizard, and he thinks she’s a witch, a witch with enough magical power to destroy…or save…the world.

Sara isn’t particularly intersted in saving the world. She’d prefer it if Torian just took his gorgeous self and disappeared from her life, permanently. But, when evil creatures known as Dark Ones come after her, she realizes that she’s going to need the power of magic to survive.

Torian sets out to teach Sara about the power she possesses. Sara isn’t the best magical student who has ever graced the earth, but she is the strongest. And as she spends more time with Torian, her feelings for the mysterious wizard grow.

But Torian is hiding secrets from Sara. Deadly secrets. And the man that she is falling for may be nothing more than a magical illusion.

In a realm where dragons roam, magic rules, and love is a fantasy, Sara Myers will begin to fall under The Wizard’s Spell.

He jerked her toward him. The porch light shone down on her. He could see the faint gold flecks in her gaze, could see smooth beauty of her skin. And the fierce determination on her face.

“Sara…” He knew it would be hard for her. She would be leaving the life, the friends, she’d known. The world he’d show her would be far different from this one.

“No.” She shook her head quickly. “I’m not going. Find somebody else.”

Damn. This was going to be harder than he’d thought. But there really was no choice. He had to protect her. “I’m sorry,” he whispered. “I hope you can understand.”

Her eyes widened. “Understand what?”

He didn’t answer. He reached up and stroked her cheek. Her skin was so warm. So soft. His gaze fell to his lips. Such perfect red, full lips. And he remembered how she’d tasted.

His head lowered toward her. He needed to kiss her again, just one more time. Torian expected her to pull away. To fight him.

Instead she met him, her lips parting instantly for the thrust of his tongue. His arms wrapped around her as he pulled her close. His mouth fed on hers. God, she tasted like sweet wine.

His tongue slid deep into the warmth of her mouth. He couldn’t get enough of her. Had to have more.

Torian fought for his control. Now wasn’t the time. He couldn’t have her. Not yet.

Slowly, so slowly, he lifted his head, breathing heavily.

She stared up at him, her mouth swollen from his kisses.

Her pulse pounded furiously at the base of her throat. Torian could see the faint tremors that shook her body. He stroked her shoulders. “Sara…I don’t remember giving you a choice.”

“The Wizard’s Spell is a page turner that I could not put down. The refreshing characters of Sara and Torian lend much creativity to the storyline. The dialogue is wonderful between the two. Ms. Eden blends a well written fascinating tale that is awesome. With a twist of some evil Dark Ones thrown in to create chaos, this story is so deliciously crafted that I could practically feel all the emotions of Sara and Torian as their romance blossoms. Great job, Ms. Eden!” Coffee Time Romance
Rating: 4 cups

“THE WIZARD’S SPELL is at times funny and at others, dark, but at heart, thoroughly entertaining. Sara is a normal, everyday woman thrown into a faerie tale of monsters and magic. Saving the world was not at the top of her to-do list, so Torian’s story has thrown her for a loop. However, when pale, fanged men start chasing her, she knows that her choices have become somewhat limited. Once Torian learned he had a mate, he couldn’t resist seeing her immediately, even though he scared her half to death in the process. Because of the Dark Ones, there are few witches left in Taren and no High Witches at all. Sara is a true miracle and one Torian would willingly die to protect…and he just might have to.””…For a little magic, mayhem, and sensual romance, pick up your copy of THE WIZARD’S SPELL today.” Kathy Samuels, Romance Reviews Today

Other Books in ImaJinn