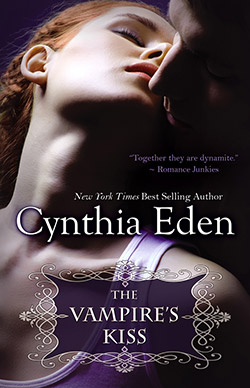 William Dark is a monster. He is a vampire, a dark creature that feeds on blood and fear. He is exactly what Savannah Daniels needs.

A year ago, her twin brother and his wife were brutally murdered. Savannah swore a vow of vengeance against the man, the beast, that killed him. A beast that is now after her. Savannah needs William’s help in order to keep her vow. She must convince him to transform her, to give her the kiss of the vampire, so that she will be strong enough to defeat the killer that is on her trail.

Savannah and William enter into an unholy alliance: He will transform her and see that she receives her justice. In return, she must be his companion, his mate, for eternity.

But, Savannah soon realizes that there is more at stake than just her life. Because once she tastes William’s kiss, she knows that she may be in jeopardy of losing her heart, as well. And she will have to put all of her trust, all of her faith, into the hands of a man who lost his soul centuries ago…

You want this, don’t you, little one? His voice purred seductively, although his lips did not move. You came here for this, didn’t you? He began to gently suckle on her neck.

“Yes,” she whispered, as her arms lifted to clutch his shoulders and pull him closer to her body. Her eyes were tightly closed.

William drew back slowly, wondering about her motives, about her willingness to surrender to a monster.Then he remembered what she’d said. “You wanted me to kill someone for you.” It was a statement. What he had taken as a jest before suddenly seemed very serious. Who was this woman? And why did she seek the Angel of Death?

“Yes,” she whispered again, refusing to open her eyes.

Look at me. The command came unbidden. The full force of his will was behind the order. He would know what the woman in his arms wanted, what dangers she presented to him. Then he would deal with her. “Who do you want me to kill?”

Her lashes lifted slowly, languorously. Her breathing was ragged. Her chest rose and fell jerkily. “Me. I want you to kill me.”

Other Books in ImaJinn