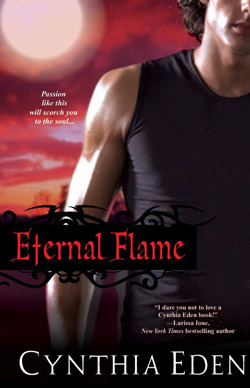 Cynthia Eden invites you into the world of the Others—supernatural creatures who are sexy, powerful, and more than human in every way…

No one that deadly should look that good. Hybrid demon Zane Wynter specializes in tracking the most lethal criminals, whether human or Other. But Jana Carter is nothing like his previous targets. She’s an Ignitor, able to conjure and control fire. She’s also sexy beyond belief—and used to playing dirty…

Jana knows she’s being set up. She even knows who’s responsible: Project Perseus, a secretive group that plans to rid the world of paranormals by any means necessary. From Louisiana’s sultry swamps to its desolate cemeteries, Jana and Zane must race to destroy the mastermind behind Perseus before their world goes up in flames—and with it, a desire that burns too hot to resist…

It was a damn sorry night to die, but then, Zane Wynter didn’t plan on dying. Killing, yeah, that was a possibility, but not dying.

Fire exploded in the night. A white-hot mountain of flames burned right through the roof of the old three-story antebellum on Francis Street and shot toward the sky, its greedy claws a bright orange in the darkness.

“Sonofabitch.” The breath of the flames scorched Zane’s skin. This was supposed to have been an easy collar. Go in, knock out the demon waiting inside, claim his bounty. A simple night’s work for a Night Watch hunter. After the collar, he’d planned to get a beer and maybe a fuck.

He took off his jacket and tossed it onto the ground. No sense getting ash on it.

A scream burst from inside the house. He stilled at the sound because that—that was a woman’s scream. And his prey was male.

Victim inside. Not just the killer he wanted, but maybe an innocent trapped in that inferno, too.

Shit. It really was a piss-poor night. He took a breath, squared his shoulders, and knew that he had to go into that damn house. Sometimes, it just sucked to be him.

Zane raced forward, even as the windows of the antebellum exploded, sending glass raining down on him. One kick and he knocked down the front door. Smoke rose, a thick gray fog. The flames crackled, and the house fell around him.

“Jacobson!” He yelled the bastard’s name. Henry Jacobson. A demon who’d been hunting and killing for the vampires in Baton Rouge. A vamp’s bitch. Seriously, what was worse? “Jacobson, where are you?” The smoke stung his nose and made his eyes water as he thundered through the rooms, searching through the flames.

Another scream. He ran for the stairs, a long, curving staircase that ended in fire and fury. Someone was on the steps. He saw a shadow in the smoke, someone hunched over, holding tight to the railing.

Too small to be his prey.

Zane took the stairs three at a time. Chunks of the ceiling fell, hitting close to him, and the heat scorched his skin. He coughed, choking on the smoke that thickened the air.

Zane reached out and grabbed—

“Help me!” Desperate blue eyes met his. Wide and dark. So dark. They reflected the flames and her fear.

The woman—small, curvy, shaking—threw her body against his and held on with all her strength. “K-kill…m-me…he was…g-gonna…” She broke off, coughing, choking, just like him.

The roof groaned above them, a long, low rumble that couldn’t be a good sign. He glanced up, saw the cracks and rolling fire in what was left of the ceiling. Fuck.

“H-help…m-me…” She shuddered again, her body rubbing against his.

The devil could take Jacobson. Zane grabbed the woman, lifted her high into his arms. He held her close against his chest and ran back down the stairs. The flames were everywhere. The fire was so damn hot, that for an instant, he thought about death.

“The action-packed sequel to 2010’s I’ll Be Slaying You highlights Zane Wynter, another member of Baton Rouge’s supernatural bounty hunter group, Night Watch. While stalking a killer, demon-human hybrid Zane rescues Jana Carter from a blazing building. But Jana isn’t an innocent victim: she’s an Ignitor, a human firestarter, and she’s been hunting non-humans on behalf of shadowy Project Perseus. Zane is attracted to Jana and grateful for her help when he’s attacked, but she’s also at the top of his hunt list and he’s determined to bring her in. When Night Watch’s headquarters is attacked, Jana joins Zane in taking down Perseus, dodging an FBI agent with a personal vendetta, and trying to clear Jana’s name. Eden’s characters are strong and sexy, the twisty movie-like plot is tight and entertaining, and the book stands well on its own. (Dec.)” —Publishers Weekly

“Smoking hot with a non-stop adrenaline rush is the perfect way to describe Eternal Flame.  Every time you think you have it pinned down, there is another blast to knock you off your feet.  Zane and Jana are just as rocketed by the ever-changing maneuvers of a master puppeteer, but through it all their passion continues to build.  Whatever is next for Night Watch had better be good, because it is going to be hard to beat this explosive couple.” Lototy, Reviewer for Coffee Time Romance & More, 5 Cups