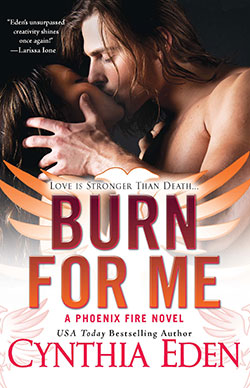 Burn For Me Audio Sample

(Book One in the Phoenix Fire Series)

Eve Bradley was undercover looking for a story, not a cause. But something about the man they called Subject Thirteen got her involved. The scientists said he was a devil, and they had a decent case: Terrifying power. A bad attitude. And looks that could lead anyone to sin. . .

Cain O’Connor knows the minute he catches her candy scent that Eve could drive him wild. But she’s a threat–in a way no one has been for him in years. She’s safer away from him, too. But with a powerful conspiracy determined to shut Eve up for good, there’s no time to argue. All they can do is trust their instincts–and their hearts. . .

She jumped at the sound of his voice; and what a dark, rumbling voice it was. When the big, bad wolf from that old fairy tale talked, Eve bet the beast had sounded just like Subject Thirteen.

She exhaled and hoped she didn’t look rattled. “I didn’t think you would.”

His lips twisted in the faintest of smiles—one that called her a liar.

Eve put the stethoscope over his heart. She adjusted the equipment, listened, and glanced up at him in surprise. “Is your heartbeat always this fast?” Grabbing his chart, she scanned through the notes. Fast, but not this fast. His heart was galloping like a racehorse.

Eve put her hand against his forehead and hissed out a breath. The guy was hot. Not warm, not feverish, hot.

And she was so close to him that her breasts brushed his arm.

“I need to draw a sample of your blood.” She also wanted to take his temperature because the guy had to be scorching. Just what was he? Not a vampire, those guys could never heat up this much. A shifter? Maybe. She’d seen one of those subjects on her first day. But the shifter had been in a cozy dorm-type room.

He hadn’t been shackled.

Eve put up the stethoscope and reached for a needle. She eased closer to Thirteen once more and rose onto her toes. The guy was big, at least six three, maybe six four, so she couldn’t quite reach his ear as she whispered, “Are you here willingly?”

Eve began to draw his blood. Thirteen didn’t even flinch as the needle slid into his arm.

But he did give a small, negative shake of his head.

Shit. She eased back down and tried to figure out just how she could help him.

“I’m Eve.” She licked her lips. His gaze followed the movement. The darkness in his stare seemed to heat. Everything about the guy was hot. “I-I can help you.”

He laughed then, and the sound chilled her. “No,” he said in that deep rumble of a voice, “you can’t.”

Eve realized she was standing between his legs. His unsecured legs. His thighs brushed against hers, and she flinched.

The smile on his face was as cold as his laughter. She’d been correct when she thought she saw a cruel edge to his lips. She could see that hardness right then. “You should be afraid,” he told her.

Yes, she was definitely getting that clue.

Eve pulled out the needle. Swabbed some alcohol over a wound she couldn’t even see. Then she stepped back, as quickly as she could.

“Don’t come back in here,” he told her, eyes narrowing. A warning.

She stilled. Now her heartbeat was the one racing too fast.

Other Books in Phoenix Fire Series